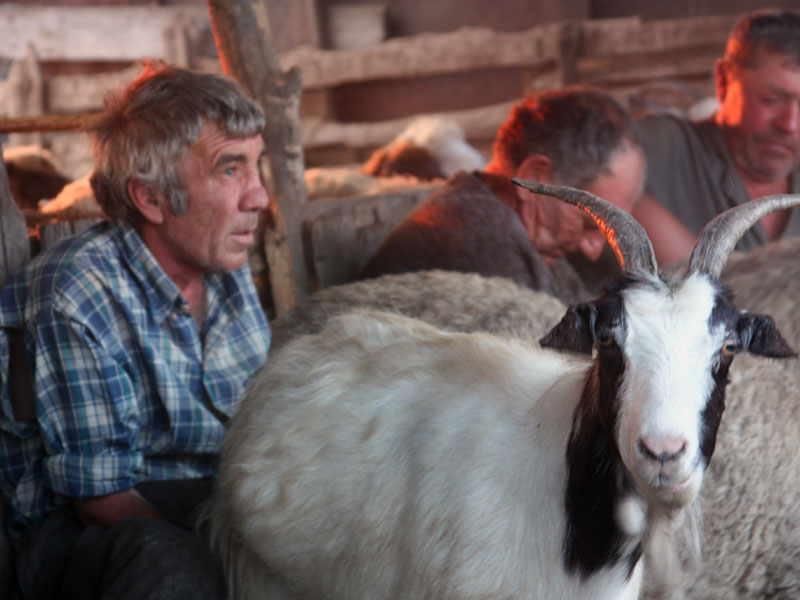 The sun is setting in the little village Valea Perjei, situated in the south of Moldova close to the Ukrainian border. Outside on the hills, there are seven men in a lively discussion while they are eating and drinking. They are sitting on an old wooden bench around a crooked table. Some German shepherds are roaming around, a donkey enjoys the last sun rays and 500 fenced sheep and goats complete the romantic setting. Time has come, though. The men have to start their work.

Stepan and Stepan do not only have their name in common. They are both shepherds and year by year they work together from April to November. Their days start early in the morning at dusk. At 6.00 am they have to milk 500 sheep and goats the first of two times a day. It is impossible to milk them all alone, thus each morning and evening the farmers from the village come and help them. They leave their sheep in the two Stepan’s care from spring to autumn. After milking the animals, the two shepherds walk dozens of kilometres with the sheep on search for lush meadows.

A tough but satisfying life

Their life is tough, they have to work outside no matter how bad the weather is, they share a two per three metres shack and one bed. Their salary is less than modest. „My grandfather was a shepherd, my father was a shepherd, I always wanted to become a shepherd, too,” says the older Stepan proudly. Not everyone can do this job. „There are some secrets which were passed on over the generations. And by the way, we know all our sheep,” adds the other Stepan. But how can they distinguish them? „A teacher knows all his pupils,” says Stepan with a golden smile and continous, „we are shepherds and we know all our sheep. Look at them! They are all unique. Can’t you see the difference?”