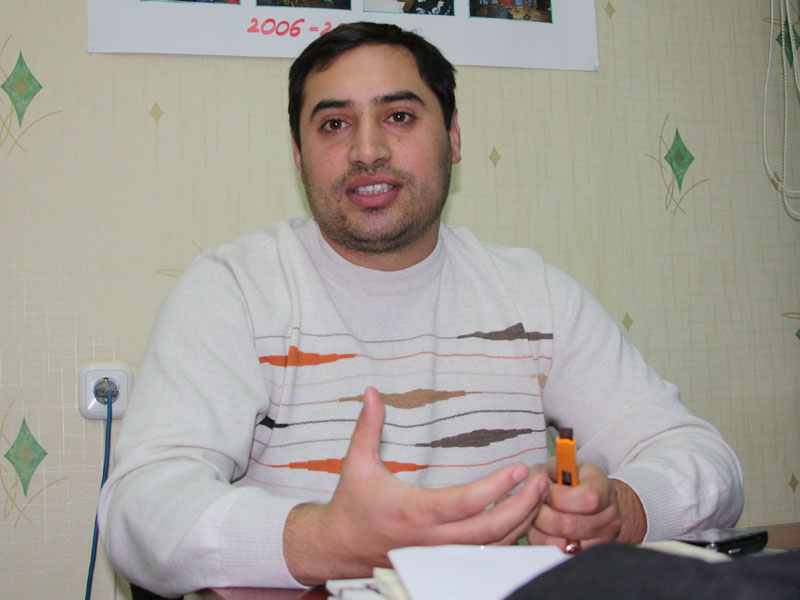 In the Republic of Moldova there are more than 150.000 Roma. Nicolae Radita is the president of the Roma National Centre and he fights for more tolerance, better education and less prejudices. Moldovarious.com visited the 30-year-old lawyer in the House of Nationalities in Chisinau and had a sophisticated conversation with him.

Moldovarious.com: What is the NGO Roma National Centre about?

Radita: In fact, we are not defined as an ethno-cultural NGO, but we have a human right approach. Our mission is to to defend the human rights and to promote the interethnic and intercultural dialogue between Roma and non-Roma in Moldova. Our main fields are education, social and health issues.

Is there a personal motivation to do this job?

I am trying to get more young people involved here, and it is important that they have access to higher education. In fact, we, Roma, just have a poor and a rich class, but we have no highly educated people. I want to help creating an intellectual class among Romas.

What is the status quo of the Romani people in Moldova?

Currently, there live more than 150.000 Romani in Moldova, which is approximately five per cent of the country’s population. It is difficult to be more precise, as there is a big flow of migration among Moldovans, including Roma. Roma live dispersed all over the country, nevertheless there are some Roma communities which are very compact. In the two northern cities Soroca and Otaci you will find the highest percentage of Roma in Moldova. Unlike in other countries, 70 per cent of the Roma live in rural areas, whereas just 30 per cent stay in urban ones. Thus, just 5000 Roma live in the capital Chisinau. Not to forget, that there are 30.000 Romani in Transnistria.

Language is the basis for everything. So, language is also the basis for identity. You may say that you are a Roma, but you are not. To have an identity means to know the language. Romani helps you to identify with specific and particular things like education in the family, culture and traditions.

How would you define the major characteristics of the Roma society?

Well, it is complicated to talk about us Roma. This is not a matter of a few words or minutes, but it is a long story of hundreds of years of history. To be a Roma does not mean to express your identity, in fact, it is a profession. We have different internal groups dividing our identitiy. The difference is based on the the traditional occupation of the family. Thus, we have Lăutari – the musicians, Ursari – Roma who move around and do performances with bears, Ciurari – the blacksmiths. According to recent studies in Romania there are more than 40 different groups, in Moldova we find just six or seven. The system of these tribal groups is comparable to the caste system in India, where we originally derived from. Nevertheless, it is problematic to talk about this topic in general, as in each country Romani developped their own system with different cultures and traditions.

What are the most important values for Roma?

The first thing which comes into my mind is the respect for elders. Secondly, we have got our own law system, which is called judecată ţigănească. The community refers to their leader, who has to judge between wrong and right. As a third point, I want to mention the concept of “cleanliness”. It is a very old value and in my point of view it is outdated. I will give an example: when a boy marries a girl she has to be clean, which means she has to be a virgin. But we live in modern times and girls have the same sexual rights than boys. Therefore, today Roma girls often are forced to marry very early, starting from the age of 12…

What role does the woman olay in the Roma society?

The role of the woman is very important. She is the one who keeps up the traditions and passes the knowledge on to the children. Although we have a patriarchal system and the man is the head of the family and represents it, in fact, most of the decisions are taken by the women.

Can you deconstruct the myth of the Romani as a nomad people?

Migration as a Roma tradition? I definitely do not agree. This is a condition imposed for surviving. I do not think that anybody wants to live in such poor conditions. Imagine a life in a tent, without electricity, without running water, without cooking facilities, without heating and without a cosy bed. Everyone wants to have at least the minimum standards of comfort. But Roma have been forced to live as nomads for centuries. Let’s take the example of a blacksmith. This is my father’s profession. But there were five blacksmiths in our village and not everyone could live on it. So, four blacksmiths had to move from village to village to sell their tools and earn their money.

What are the future prospects for the next 10 years?

I am an optimist. I hope the political class will change in Moldova and young, well-educated people will come to leadership. The new generation has to care about values like democracy, independence, human rights, tolerance. As long as ruling politicians, who are heads of departments or ministries, do not understand elementary words like “tolerance”, there is little hope in this country.