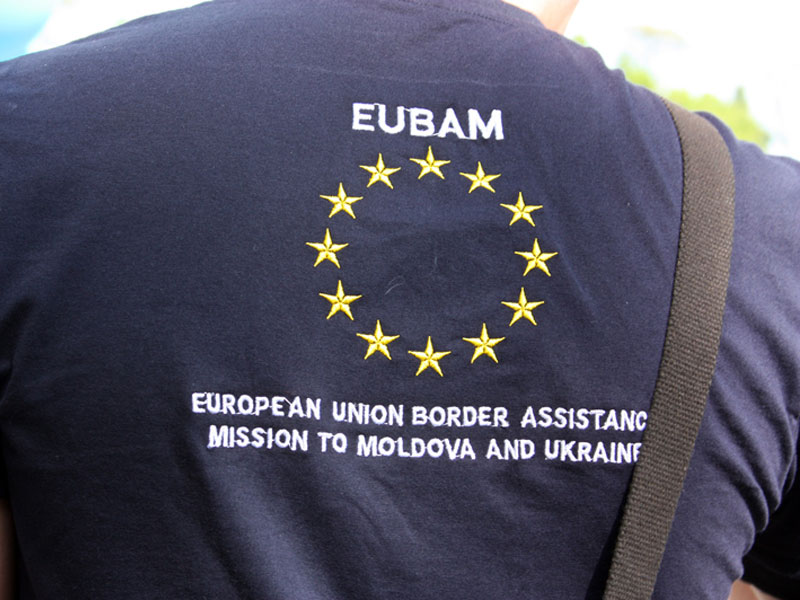 The EU Border Assistance Mission to Moldova and Ukraine (EUBAM) was launched on 30 November 2005 at the joint request of the presidents of Moldova and Ukraine. EUBAM is an EU mission and fully funded by the European Union. It is an advisory, technical body and has no executive powers. The principal partners of the Mission are the Moldovan and Ukrainian border guard and customs services.

The base of this cooperation is mutual trust, respect and exchange of experience between professionals. The mandate of the Mission has now been extended till November 2011 – a good reason to look behind the scenes of EUBAM…
The Mission has its headquarters in Odessa and currently has six field offices (3 on the Moldovan side, 3 on the Ukrainian side). EUBAM is comprised of 226 staff members including 114 international and 112 local staff. 22 EU Member States are represented in the Mission.

The Mission’s aims are to:

The Mission provides on-the-job training and advice to Moldovan and Ukrainian border officials, reinforcing their capacity to carry out effective border and customs controls and border surveillance. It also provides customised training courses on key border issues, and organises study visits to the European Union and other nearby borders to exchange experience. Through its work, the Mission contributes to strengthening cross border cooperation and confidence building, and helps to improve transparency along the Moldovan Ukrainian border.

According to Liva Biseniece, Reporting and Communications Officer from EUBAM, the most smuggled category of products over the green border and through border crossing points (BCPs) in all sectors of the Moldovan-Ukrainian border, including the Transnistrian sector, are cigarettes, meat, alcohol, fruits, vegetables and – to a certain extent – drugs such as marihuana. Additionally, cases of illegal migration and border regime violations are reported.
Smuggling of chicken meat involving the Transnistrian region of Moldova is rather common illegal activity. For example, according to customs documentation, large amounts of meat were imported to the Transnistrian region of Moldova through Odessa and Illichyvsk ports. From January to May 2009 alone, nearly 20 thousand tonnes of chicken meat went to TN. This amount constitutes approximately 71-92 kilograms of chicken meat per one inhabitant of TN. In comparison, an average consumption of chicken meat in Germany is around 10 kilograms per person annually. Evidence suggested that much of this meat is transited only virtually on paper or re-exported from TN to Ukraine and other regions of Moldova. The profits to be made and the consequent losses to the state budget were very large. Smugglers could make a profit of around EUR 620 on every 1 tonne of smuggled chicken meat. The potential loss to the Ukrainian state budget in one year is estimated at EUR 30 million. In response, the State Customs Service of Ukrainian with EUBAM’s assistance started joint convoys for the cargo with chicken meet going from Odessa and Illichivsk ports to Transnistria. As a result, in June-July 2009 the transit of meat to the Transnistrian region of Moldova reduced to a realistic consumption level of the TN population, i.e. to approximately 6-8 kg per person annually.

There are some external references, which can be used to describe the effectiveness of the Mission. For example, in 2008 the European Court of Auditors in its Special Report about the effectiveness of the EU support in the area of freedom, security and justice for Moldova and Ukraine praised the work of the Mission and stated that EUBAM contributed greatly to building capacity in the Moldovan and Ukrainian border guard and custom services. Similarly, the governments of both host countries repeatedly expressed their satisfaction on the work of the Mission. That is one of reason why EUBAM’s mandate was extended for additional two years by the end of 2011.

On the operational level, several aspects can be mentioned to evidence the results of the Mission and its partners. The border services of Moldova and Ukraine have made efforts to improve their performance and cooperation over the past three years, and have achieved significant progress in many areas of their work, including:

The nature of the tasks of a non-executive mission such as EUBAM are challenging, particularly in scenarios where there is no immediate EU accession perspective, and careful framing of the role of a mission as a partner, not an auditor and as an opportunity, not a threat needs to inform all dealings with host countries.
The Mission has established good cooperation with its international partner organisations, which now provides a platform for joint initiatives and intensified exchange of information. Opportunities exist for the Member States to make better use of the Mission as well as for improved coordination of EU activities in the region.

EUBAM benefits from the mix of professional and national backgrounds, taking in both older and newer member states of the EU, enabling it to give practical expression to the phrase “United in Diversity”. Increased contextual awareness and attention to linguistic and cultural acclimatisation and integration into the communities where Mission members live and work, may pay dividends in future. Over the years EUBAM has been able to play a significant role as a neutral observer of the situation at the border between Moldova, Transdniestria and Ukraine.