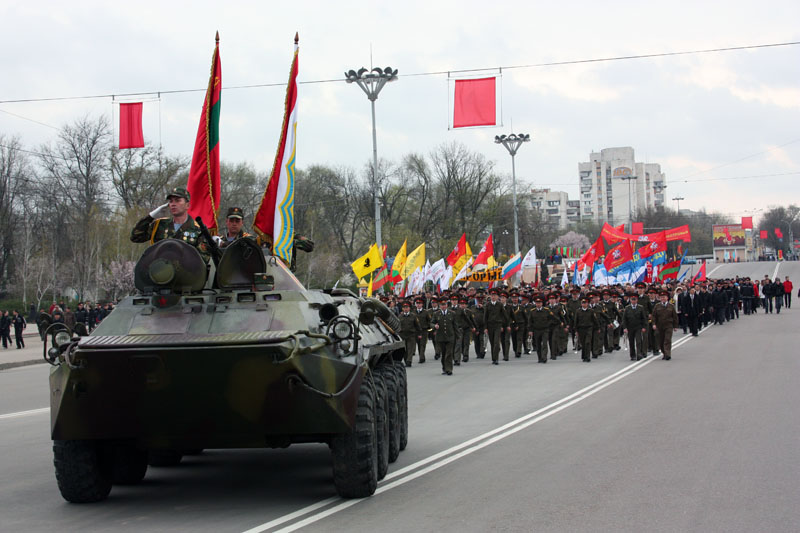 April 12, 2009 marked the 65th anniversary of the liberation of Tiraspol from Nazi forces in World War II. In Transnistria, the day is officially known as ‘Day of the Liberation of the City from German Fascist Invaders’. While this may not easily roll off the tongue, it is simply known to most as the ‘Day of Liberation’.

The morning started off quietly with a small parade led by an armored tank, which was followed by a delegation of various dignitaries. The parade slowly moved down the central street to the memorial complex opposite the former Pioneer House, where various state dignitaries proceeded to lay flowers at the ‘Memorial of Glory’ in the central square of Tiraspol. This solemn event, translated in the official holiday material as a requiem meeting, ‘Glory to those heroes who died, Glory to those heroes who live’ honored veterans of the Great Patriotic War, both living and departed. At this solemn ritual commemoration, various politicians, dignitaries, representatives of political parties, and community organizations, along with local residents of all ages, participated in honoring the liberation of the city through solemn remembrance and the symbolic laying of flowers.

At full speed in military camouflage

After this solemn moment, a more cheerful mood emerged, as the city-wide festivities commenced, including a relay race through the city. The races began and ended in front of the Tiraspol movie theater. The races were perhaps the highlight of the day, as it was like a city/regional tournament, with many groups and institutions participating in the different races. The first race, and perhaps the most interesting, was one between various ministries and security forces, with each running in uniform. This made for some very interesting scenes, as uniformed traffic officers raced at full speed next to others in full military camouflage. The subsequent races encompassed political parties and civil organizations, followed by races among local Tiraspol schools, university faculties, institutes/colleges, and the various regions/cities of Transnistria. All in all it was a refreshing, festive atmosphere, one that took the occasion of the liberation of the city as a time to actively remember history through cooperation and competition.

After the relay race – the 61st since the liberation of the city, a tradition that attests to the active sports culture of the region – there were various concerts and variety shows on the outdoor stage near the central movie theater. In honor of the patriotic occasion, the master of ceremonies for the stage shows were dressed in authentic World War II era uniforms. I never thought I would see Soviet-era dressed speakers introducing modern pop and disco singers! What a sight! As the day turned into evening, a festive atmosphere emerged among those that could withstand the chilly weather. Youth turned out in full force for the dance festival, and the festivities concluded with a thundering fireworks show at 9pm. I wonder if this holiday will top the Victory Day festivities on May 9? We’ll have to see…