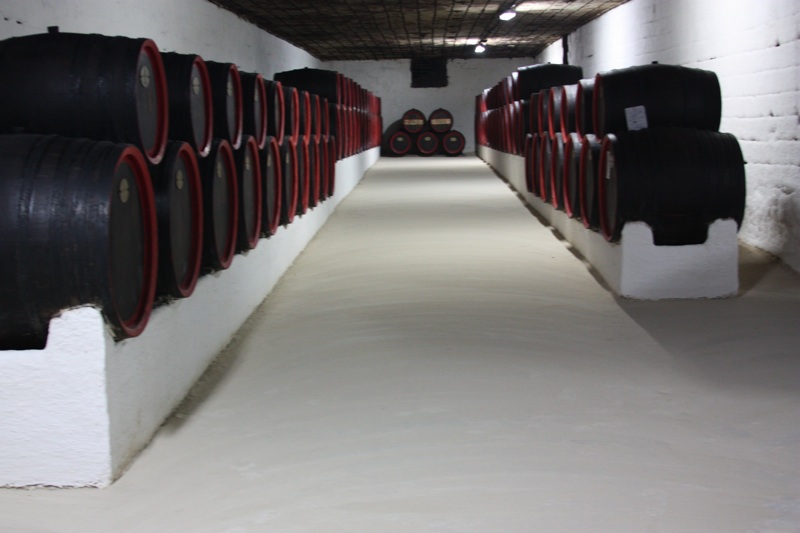 Whether you are a local or a tourist, it is a fact that you will be impressed by the most imposing und largest underground wine cellar of the world – Cricova! So were we, a small family, willing to discover the most famous treasure of the country. The two hours car trip 60 metres underground, along the wine labyrinths and the guide’s exciting stories about the history and development of the cellar brought us the biggest satisfaction.

Cricova wine cellar, located in the central part of Moldova, in the core of Codru and the town with the same name, just 15 km north of the capital city Chisinau, has its beginning in the 15th century. The mines of Cricova have been used for hundreds of years to dig out, manually, limestone for building the city of Chisinau and its surrounding towns. After the Second World War, the academic Petru Ungureanu came with the brilliant idea and the first experiences of using the 200 km long tunnels as a wine storage. In present 65 km of the roadways are converted into a huge subterranean wine cellar with the most favourable temperature (about +10-12 °C) and ideal humidity throughout the year for the storage of millions of bottles of wine, 1.2 millions of which represent rare wine.

The underground wine city is an amazing labyrinth of subterranean streets, each of which bares the names of the variety of grapes. Would you like to have a ride on the Sauvignon, Cabernet, Aligote or Chardonnay streets? Or probably you want to make a stop on the Champagne Boulevard and learn its own three hundred years old story? Don’t hesitate to make some pictures, too! You will be impressed by the number of wooden barrels, which have the capacity of storage over 40 millions litres of wine.

But the most magnificent part of Cricova’s wine city is definitely the immense gallery with its limestone caves, used to store an exceptional wine collection with old and rare wines, giving a unique value to this collection. The two most precious and unique exhibits are one of the 400 bottles of “Jerusalem of Easter” wine, produced as a single badge in 1402 as well as the “Jan Becker” liqueur, produced in the same year, containing unknown ingredients kept secret forever. More than 150 old renowned Europeans brands such as Bourgogne, Mosel, Rein, Tokay, etc., bottled in the first half on the twentieth century do not only represent the gallery’s thesaurus, but also the treasure of Moldova in general. Theoretically, you could take home a bottle of wine from this collection, but only if you would be able to pay about sixty thousands dollars for it. Well, there are also some cheaper samples, for which you could pay the half.

Even the noblest tastes can be satisfied by Cricova’s wine cellar. Do you prefer strong wine brands from Africa, central Asia, the Near East, classical Portuguese collection and rare wine of Georgia, Armenia and Crimea or noble wines of domestic production? You will find everything there! So did the ex-president of Russia Mr. Putin, who after celebrating his 50th birthday in Cricova’s wine cellar bought a notable wine collection and keeps it in the underground gallery. If you want your wine collection to be a part of the gallery, just rent a limestone cave and your name can extend the list of more than 650 names.

Yuri Gagarin would fly to moon for Cricova

Cricova is not only about a subterranean car trip it is also wine tasting and delicious dinner in the charming wine tasting halls. One of them shows on its ceiling the era when present Moldova was under sea. Be prepared to enjoy a couple of different wine varieties and make your own appreciations. At the end of the tour you will be happy to receive a cellar’s present – a few bottles of collection wines.

High officials, scientists and thousand of tourists from more than one hundred countries visit and leave Moldova’s treasure through greatest moments of satisfaction.

The astronaut Yuri Gagarin, who visited the cellar in the 60s, said to have spent two days in Cricova’s labyrinths, promised, “if the Earth will lack metals to print medals for the local wines, I will deliver it from the moon or other planets”.

Taste the Cricova wine with us in the wine gallery!