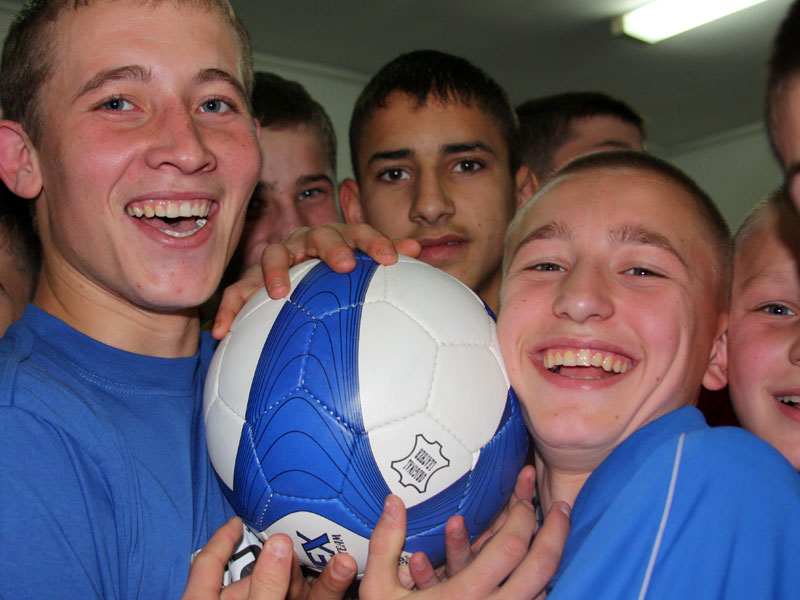 The Football Against Racism in Europe (FARE) network called for its 9th action week in and around football stadiums all over Europe. From 16th of October to 2nd of November fans, clubs, ethnic minorities and national associations made a united effort to rid the game of racism and exclusion in unprecedentent 1000 initiatives in not less than 40 European countries. On Saturday, November 1, the action week stopped in Chisinau.

The NGO Fatima, the Charity Centre for Refugees (CCR) and Moldovarious.com organised a panel discussion about the status quo and possible solutions to tackle racism in Moldova. After the theoretical input, the 100 participants went to action on the pitch. Refugees, immigrants, volunteers in Moldova and locals of both sexes and all ages played a football tournament and thus kicked racism symbolically.

“We all love football”

“Football, being the most popular sport in the world, belongs to everyone,” so Dr. Keita Abdramane, organiser and moderator of the discussion, “The ethnical, religious or cultural background does not count. The only thing that counts is that we all love football.” The content of a FARE video with racist incidents in Italian and Polish football stadiums clearly show that not all football supporters agree with these words. There is still a long way to go that each person can play, watch and discuss about football freely and without fear.

Racist incidents in the stadium

Daniel Nade, a black player from FC Olimpia Balti, has faced racial abuses in Moldovan stadiums. “I want you to know that this hurts. Supporters and players from opponent teams should respect me as a human and as a footballer,” is Nade’s message to the mostly young participants of the debate. Football stars are role models in antiracist activities. Football Associations do not play a less important role in combatting racism. Dumitru Sandu, the representative of the Federaţia Moldovenească de Fotbal, is very aware of this fact and addressed the present pupils, “You are still young and I want you to learn to be tolerant. When you play football, see the person not the colour of the skin. So go out and enjoy yourself.”

A kick against Racism

That is what the four school teams of Posta Veche and Igor Vieru, the team of CCR and the volunteers did. Fair games of a surprisingly high technical level were played in the small and bumpy pitch. The motivated pupils from Posta Veche were running and fighting till the last minute, nevertheless the “star team” of CCR with players from Nigeria, Ghana, Chechnya, Afghanistan and Syria held the cup in their hands at the end. By the way, the cup was a tiny ballerina with the symbolic meaning, that the game is open to everyone.

Check out the anti-racist gallery!