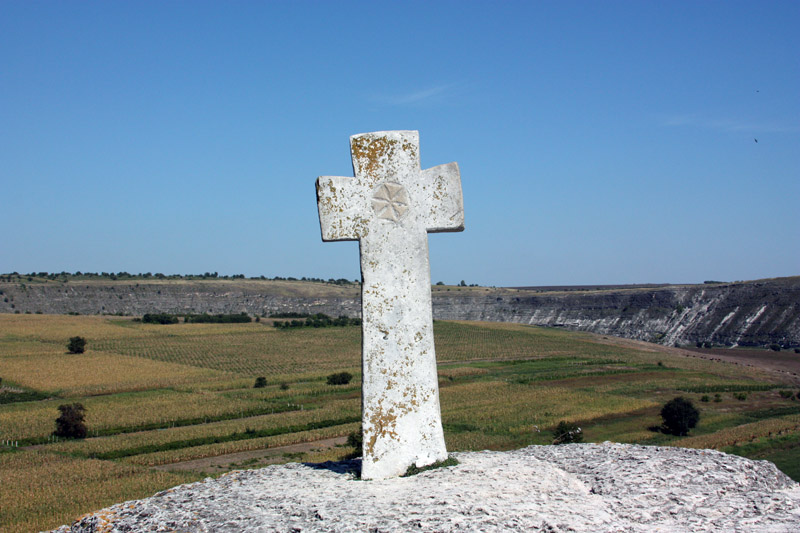 Compared to the rest of the rather unspectacular landscape in Moldova, the scenery, where the archaeological complex Orheiul Vechi is situated, is refreshengly different. Just 60 km north east of Chisinau, in the valley of the Raut River, a fabulous complex carved into a massive limestone cliff suddenly appears out of nowhere.

The cultural landscape Orheiul Vechi covers 29 archaeological monuments, which were used to protect people for centuries, beginning from the Palaeolithic time till our days.

The Orthodox St. Mary Church plays a dominant role in the archeological landscape. It was built in 1904 and is situated in the centre part of the headland. The church was shut down by the Soviets in 1944, and remained abandoned throughout the Communist regime. After a time of restoration, nowadays, the church appears in new splendour.

Another highlight of the mysterious area is the cave monastery inside a cliff, built by Orthodox monks in the 13th century, with its stone terrace, from where views of the entire cliff and surrounding plains are nothing less than breathtaking. There are a lot of cave monasteries in the world, but the archaeological complex Orheiul Vechi embedded in such a spectacular landscape, and the interaction between humans and nature has created a unique cultural and natural landscape of rarely seen beauty. Therefore, it did not come as a big surprise, that most of the monuments were registered in the UNESCO World Heritage List in July 2007.

It is the melange between the archaic natural landscape, the more than interesting biodiversity, the exceptional archaeological framework and the historical and architectural variety, which makes the archaeological complex to be a case sui generis.