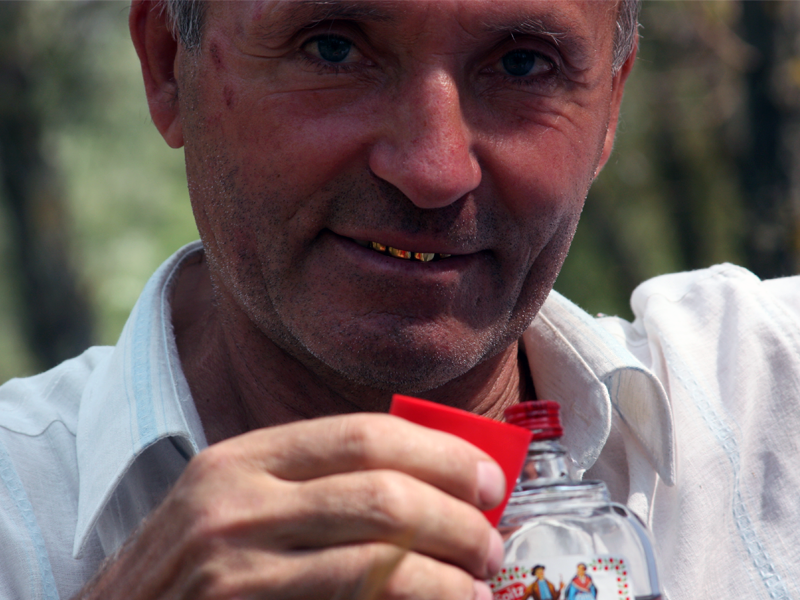 “Yes, we are all equal,” is Anatolie convinced. He is in a lively discussion with a black man and an Indian, sipping Austrian schnaps. “It doesn’t matter what someone looks like, it is important what is in his heart.” Quickly, he finishes his alcoholic drink, hugs the two men and off he goes to the next group of people having a barbecue in his park. Once more he is invited, this time to a shot of Wodka and a sizzling piece of saslik. Anatolie likes his job.

Anatolie lives in the small village Bereşca, right outside of Chisinau. The pensioner owns an idyllic park, which he transformed into a barbecue’s paradise. There he rents a handful well-kept places for barbecues out. As soon as it gets warm in spring the places are well booked. Anatolie knows that, “People of Chisinau like to come here. It is not too far, the place is clean and the prices are not high.” It is end of October and some fanatics are still having a day out. Anatolie, however, is well prepared for this winter. In a corner of the park there are some new wooden shacks for rent. “Moldovans like to party,” so Anatolie, “they want to drink, dance and …, you know. Sometimes they need a quiet place to do so. I have this place to offer.”

The 68-year-old man used to be a lawyer before he retired. “I was strict but fair,” does he start his monologue about the communist era. There is definitely a little bit of nostalgia, when he speaks about the past. Most memories are positve. He explains in detail all his journeys, to former eastern European countries. The only thing he regrets in his life is, that he could not visit Vienna. For him Vienna is the “capital of culture”. He knows a lot about it, as his father was there and passed his knowledge on. Anatolie is happy, that he can talk to Austrians, hugs us, gives us a kiss on our cheeks and joins the next group in his park.