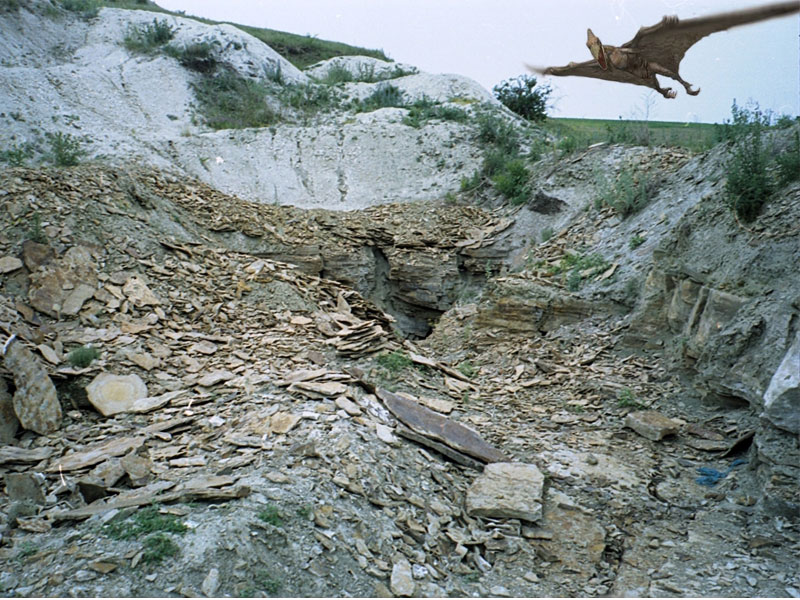 During one of Leonid Rosca’s expeditions to explore his homeland, a lump of rock stuck into his eye. In fact, it was not the rock itself, but the form of its surface. He figured out a head, a beak, eyes, bones, wings. Leonid had discovered a petrified 150-million-year-old Pterodaktyl and thus by far the oldest remains of an animal ever found in the Republic of Moldova.

Leonid Rosca, a passionate hiker, takes us to a secret place, where he has hidden his prehistorical find. “In fact, it was not really by chance that I found the Pterodaktyl in this place. A friend of mine gave me a hint. He figured out three unusual footprints on the wall of his house, made by stones from the area.” The exact place where the Pterodaktyl was dug out will always remain Rosca’s secret. According to him, there must be hundreds of such stones on the former coastline. In the Jurassic Age today’s Moldova was discovered to two thirds by the sea. The petrified animal with a wing size of two and a half metres, was thus found in the north of the Republic.

“I found this lump of rock next to it”, says Leonid and points to a stone in the form of waves. “This is an indicator that the carnivore hunted at the seaside for prey.” And there the hobby archaeologist comes up with another rock showing traces of an animal. This looks like an enormous prehistoric prawn. Last but not least the enthusiastic and lively man in his early forties takes some huge teeth out of a small container. They are seven centimetres of size. Rosca, however, still has not figured out to which prehistoric animal they belonged.

“My Pteo had a calm life for six years,” explains Leonid Rosca and goes on, “but now he is in the centre of attention. You are not the first journalists to take photos of him.” The outdoor guide, that loves kayaking and climbing, has built up a close relation to “his” Pterodaktyl. “I had to choose an exclusive name, as this animal is the only one of this kind in Moldova.” So he decided to combine his own name “Leonid” with the name “Pterodaktyl” to come up with “Pteo”. Pteo’s future is not clear yet. Leonid thinks about handing the precious find to the ethnographical museum in Chisinau. Nevertheless he is in doubt if this is the right move. “When I think that stones with remains of prehistoric animals are sold to construction and houses are built with them, I fear that the value of my discovery is not appreciated to the right extent.”