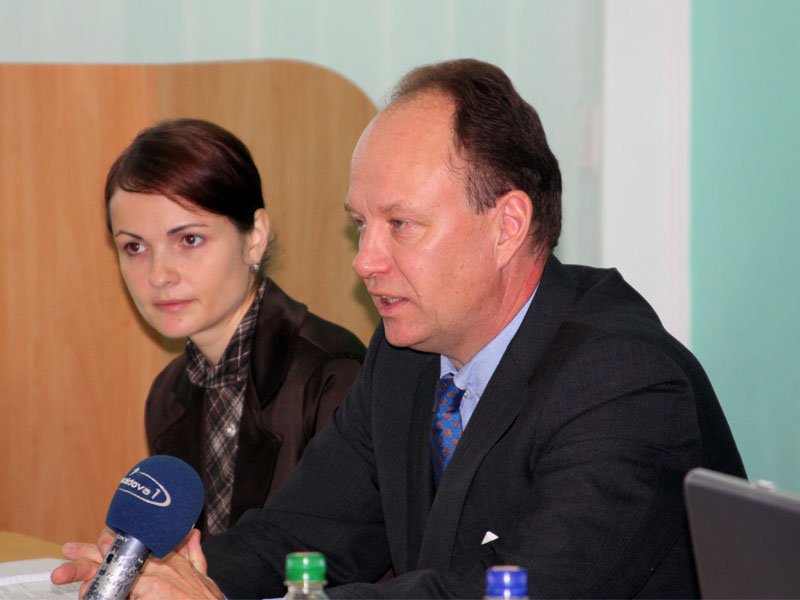 „The ties between Germany and Moldova are historical”, opens Nikolaus von der Wenge Graf Lambsdorff, the German ambassador to Moldova, his lecture at University Perspectiva. „Our Bundespräsident Horst Köhler officially declared that he was a Bessarabia German.”

The Germans were the first to open an embassy in Moldova after the republic had declared its independence in 1991. Graf Lambsdorff is proud to mention that, “we Germans are among the most committed nations to implement cultural, social and economic development projects in the Republic of Moldova.” The latest event was a huge open-air concert of the famous German band Sportfreunde Stiller and the most Moldovan ethno-formation Zdob si Zdub in Chisinau’s main square Piaţa Marii Adunări Naţionale. In these days the Germans remember the fall of the Berlin Wall and the unification of Western and Eastern Germany 20 years ago. The diplomat is sure that the German unification is unique. Nevertheless they offer their help and want to bring in their experience to solve conflicts such as the Moldovan and Transnistrian one. “We’d like to see Moldova unified with Transnistria, and we want to re-establish and tighten our century-old relationships”, looks the ambassador in a positive future for both, Germany and Moldova.

Germans settled in Bessarabia in the times of the Russian tsars, to be more precise in the first half of the 19th Century. Together with other ethnic groups such as Bulgarians and Gagauzians, they did not only receive free farming land but also a special status with religious freedom, self-administration and no obligation to serve in the military. Today just the village names remind of a German past: Alexanderfeld, Marienfeld, Ambasadorf. Nearly all of the Bessarabian Germans moved back to their homeland during World War II. “We have to be aware of the importance that Germans played in our past”, says the historian Anton Moraru and continues, “in Bessarabian newspapers there was always a whole page written in German, countless companies were founded by Germans, lots of know-how was imported.” Moraru knows about 30 villages in Transnistria with German links. “But we still have to do more research, as this issue has not been studied so far in Transnistria.”

Germans do a travel guide

Jan Peter Abraham is one of the few dozens Germans living permanently in the Republic of Moldova today. He is the head of the DAAD – Deutscher akademische Austauschdienst, which is the German academic exchange programme. Next to his job as a coordinator and teacher at the state university in Chisinau he runs several projects. “Together with my students here and some students of German in Transnistria we are producing a travel guide”, gives Abraham insights in his work.

The round table “Germany – Development Cooperation in Moldova” with the Graf Lambsdorff at the University Perspectiva was organised by Professor Natalia Domkovici. “Next to the talks of our German guests we show an exhibition about the German unification and our students prepared specific papers about Germany”, says Domkovici. The department of European Integration has a special focus on Germany and Austria. The College of Tourism in Innsbruck is partner of University Perspectiva and students are very keen to take advantage of the exchange programme. The head of the department and representative of the Austrian-Moldovan society adds, “we are glad to have these close ties with Austria and Germany and we know that in future we have to strengthen our partnerships. This is the part our university can do for a tolerant and peaceful common European future.”