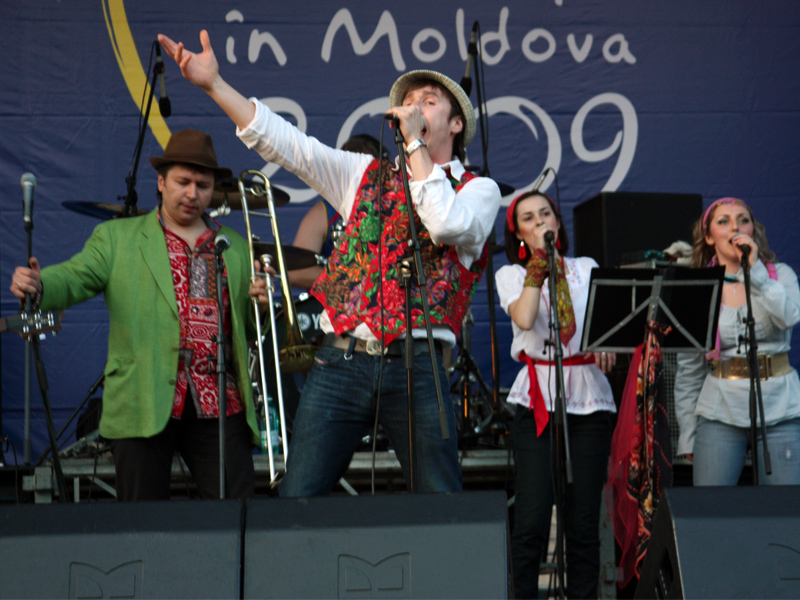 Once the Moldovan band Zdob si Zdub played at the Eurovision-Song-Contest. They delighted their audience with an unmistakable mix of Moldovan folk music, Balkan-Vibes and elements of rock music. Zdob si Zdub landed a summer hit record together with Austrian’s Hubert von Goisern in their country in 2009. Moldovarious.com wanted to know how the Moldovan version of “Koa Hiatamadl” sounds like.

“The lads are just recording their new CD. You can pass by whenever you want”, says the friendly voice on the other end of the line in clear German. Igor Dinga is the manager of Zdob si Zdob, the most famous Moldovan band. He had been living in Germany for yours and is German citizen. About ten years ago the Ethno-Rock band played their first time in Munich. Only a couple of weeks later two German bands were invited to Chisinau. That was the starting point for an international carrier. In 1994, however, everything began totally different. “At the start we only did rock music and often performed in Russia”, remembers Mihai Gincu, the bassist who also writes the lyrics. They had their international breakthrough only after the new orientation of their music and consequently the success of the Eurovision Song Contest in 2005.

“When the Austrian musician Hubert von Goisern called to invite us to a Danube Tour, we immediately agreed”, says Igor Buzurniuc, the youngest member of the formation. The Austrian organised a musical boat trip on the Danube. Bands from all eight Danube countries were invited to give concerts at different ports such us Galati in Romania or Izmail in Ukraine. “In this week on the boat we became a family”, is Igor still moved. And of course the family had to play as an ensemble. “We just improvised together and suddenly the “Hiatamadl” became a beautiful Moldovan lady.” The song was put on their latest CD “Ethnomecanica” and a live-performance turned into a video clip. Since then, Moldovan radio stations continuously play the Austro-Moldovan music fusion “Koa Hiatmadl”. A hit record was born.

For Zdob si Zdub this is just routine. They are the only band in the country that works on a professional basis: with a manager, a secretary and their own studio. This, however, does look at least from the outside anything else than inviting. The building is a former factory of compressors for Soviet atomic submarines. Zdob si Zdub regularly give big concerts in Moldova with crowds up to 20.000. They successfully performed at the international festivals of Sziget in Hungary and Roskilde in Denmark. Igor, however, really likes Austria. He finds that, “the nature there is inspiring. In fact we should seriously think about staying in Austria for a couple of months and write some songs there.” This is not that easy, though. Even though Zdob si Zdub are Moldova’s cultural ambassadors number 1, the Visa-regulations are tough as usual. 90 days abroad are enough. Then it is high time to come back home. Well, law is law. And it is the same for everyone, as well for Zdob si Zdub.

Join us in Zdob si Zdub’s sound studio and during the Europe Day concert by klicking here!