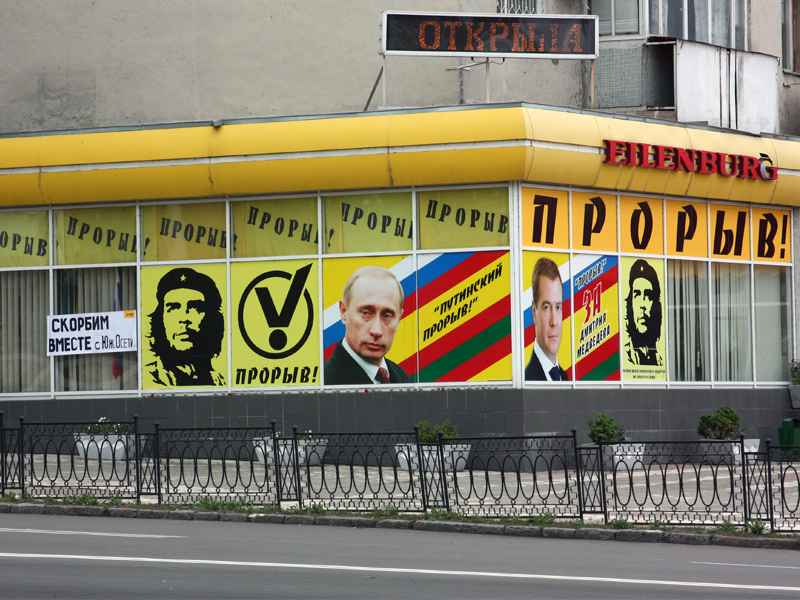 On a walk through the main street of Tiraspol, the capital of Transdniestria, you pass by some main attractions as the Lenin statue in front of the parliament building, the outstanding statue of Alexander Suvorov or the Soviet tank monument.

Another particular eye-catcher are the headquarters of the political youth movement and political party “Proriv”. Moldovarious.com spent one day alongside the representatives of the organisation and looked behind the curtains.

The portraits of the Russian leaders, Dimitry Medvedev and Vladimir Putin on the yellow front of the office are highly visible, and of course there is also an image of the revolutionary Che Guevara who is inseparably linked with Proriv. The activists see themselves as the children of the sun who will break through the vicious circle where a personality is nothing and people’s will is not recognised.

The symbolism of the political youth movement is clear and unambiguous. By entering the office of Proriv we can see a ritual act that opens every official meeting of the youth movement. A handful of young people with clenched fists scream in a raised voice the slogans “Trandsniestria – Che Guevara – Proriv!” In short, these are the main catchwords that describe the ideology of the political movement. Alla Buchacova is one of the key members of the organisation. She is a school psychologist and a member of the people’s democratic party of Proriv. She explains that the main aims of the organisation are the sovereignty and recognition of Transdniestria, democracy and the unity with Russia, which is based on the common historical and cultural background. Moreover, Moscow is in their eyes the main guarantor of military, economic, and information-political safety. Like thousands other people in Transdniestria, Alla Buchacova holds the Russian passport and her first language is Russian but she explains that cooperation with Russia does not mean that they are against cooperation with Europe.

Break through in harmony

After we have thrown an eye in the official manifesto from the organisation we can figure out that Proriv is more than a political party. They are for a healthy way of life, harmony, a good education and against alcoholism, drugs, corruption and crime. Young people have the chance to practise sport such as volleyball, yoga or they can use the own fitness gym. Like in a social centre there is the opportunity of a free Internet access and different workshops for young people are offered. Our next stop takes us to the seventh floor of the Hotel Aist, which is just next to the official headquarters of Proriv. Here the organisation has more offices and we are going to meet one guy who has been playing a key role within the movement from the very first days since its beginning in 2005. Dmitry Soin, a former officer of the region’s state security ministry, is the chief ideologist of Proriv. He was born 1969 in Tiraspol and studied history in Moscow. The smart guy tells us that the core of Proriv is the “Che Guevara High School of Political Leadership”, which was created to provide training for the young political activists.

Furthermore, Proriv cooperates with Russian organisations but also with the Gagauzian youth movement and they took part in some activities from NGOs in Moldova. Besides the Che Guevara School, Proriv has their own media (internet site, radio programme and newspaper), the publishing centre and support groups of their creative initiatives and a marketing department. Concerning prospects of the settlement of the conflict between Transdniestria and the Republic of Moldova Proriv, by their own account, supports the negotiating process and the movement opposes any forms of escalation of intensity. They want the equal dialogue for both sides and would appreciate more active negotiations.

Suddenly more and more action comes into play and we have to change the place back to the headquarters of Proriv where yellow and black banners are being prepared for an upcoming street action.  During the year, activists of the organisation are celebrating several national holidays from Russia; in days when the elections of the Russian State Duma or the presidential elections in Russia take place, Proriv starts campaigns to mobilise Transnistrians who hold the Russian citizenship to vote.

Today another activity is on the agenda. Some activists are spreading flyers on the streets while others are getting ready for the car convoy through Tiraspol, accompanied by Russian flags and the noise of the car buzzers. Before getting into his car one of the activists tells us proudly that Transdniestria might be for someone only an unrecognised Republic but for him its his motherland. Even if Proriv is internationally a contested organisation they have shown that they are political leaders in Transdniestria who deal with many diverse issues.

A day full of events comes to an end so we lie back and have a look on the pictures of the day!