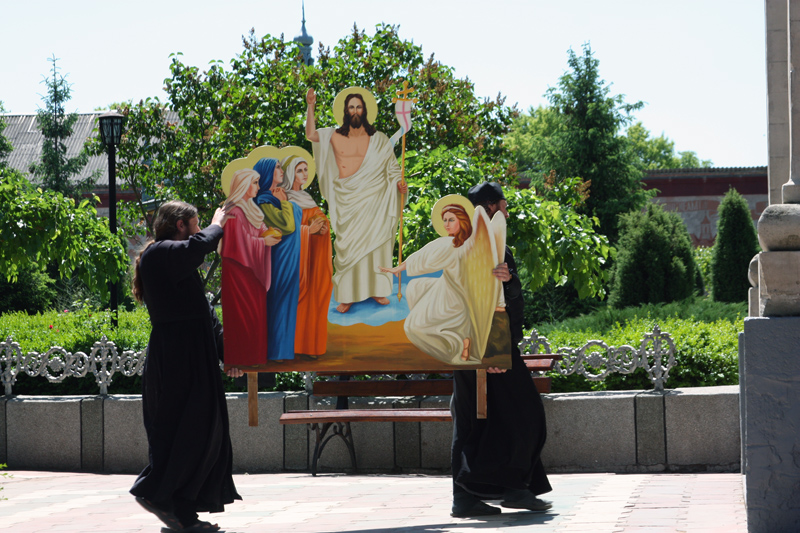 Chiţcani is the biggest religious complex on the territory of the Republic of Moldova. The all-male monastery is located on the right bank of the Dniester, not far from Bender, in the village of Chiţcani. The name “Novo-Nyametskyi Sviato Voznesenskyi Cloister” signifies the status of the monastery as a successor to the original Neamţ Monastery in Romania.

On a sunny day Moldovarious.com paid a visit to this unique place. The monastery was founded in 1861, when several monks from the Mănastirea Neamţ in Romania left and founded Noul-Neamţ in Chiţcani. The founding of the new monastery was a protest against the measures taken in Romania to confiscate monastery estates and forbid the usage of Slavonic language in worship.

The Ascension Cathedral and the monastery’s belfry were constructed in 1864. Later, at the beginning of the 20th century, the rest of buildings such as a hospital, kitchen, refectory and two-storied monks’ residences were built. Under the Soviet era, it was at times used as a makeshift hospital, later as a storehouse and also as a museum.

The monastic ensemble consists of 4 houses of worship: There is a summer ascension cathedral, a winter assumption church, the St. Nicholas Seminary’s Temple and the Exaltation Reflectory Church. The monastery also has its own printing house and a theological seminary.

The outstanding bell tower consists of five levels and raises 69 metres up to the sky. The current bells were cast in Moscow in 1913 and delivered partly by train and then on the back of bulls to the cloister. On 16 May 1962 Soviet authorities closed the monastery, which became a hospital.
The monastery church was reopened in 1989, followed in 1991 by the Romanian-language school for orthodox priests. Interesting is the fact that the buildings on the Cloister’s territory haven’t been destroyed during different wars. Today, nearly 50 monks and 30 fervent followers live in the monastery and keep the territory in good condition.

Moldovarious.com gladly accepted the invitation of the monks not to miss the outstanding picturesque landscape from the upper level of the highest bell tower in the country. To join in klick here!