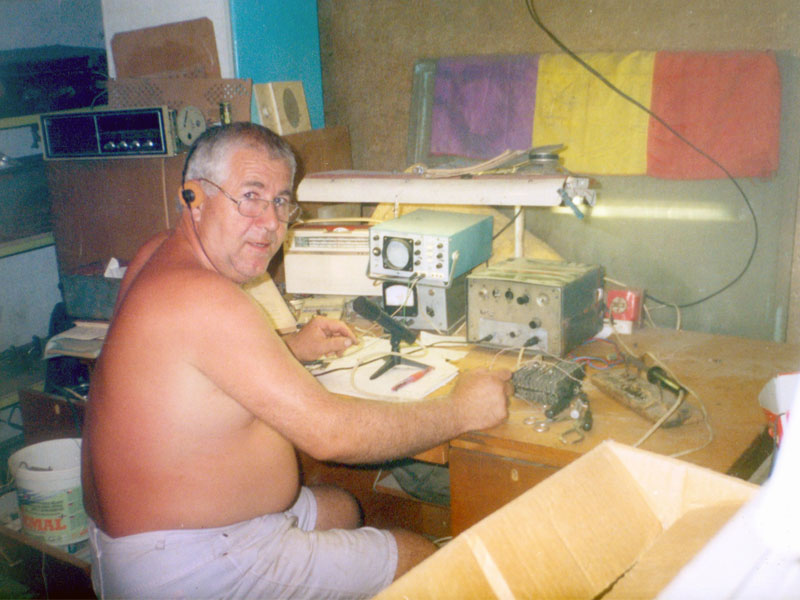 In 1991, Moldova declared its independence; 11 years later its citizens still were not sure about their possibilities in a democratic country. “Someone had to tackle this passivity”, says Mocanu and continues, “I had the strong feeling to raise my voice.” Night per night for several months the radio engineer worked on a homemade radio transmitter. Eventually, he succeeded and broadcasted his own interactive radio show, which became very popular within no matter of time. “Not only did countless interested Moldovans contribute to my radio show, but the local authorities, the government and police also wanted to know what was going on in my sleeping room”, says Mocanu with a sarcastic smile on his face. Two months after its kick-off, police forced Mocanu to quit the “illegal” broadcasting of Radio Sîngera. Still not intimated and with the strong will to help creating an open society with democratic values, Mocanu founded the NGO Radio Sîngera. The pensioner worked out a master plan for a free radio station in Sîngera and handed it over to the local council office. The Soros Foundation and US-Aid supported his plans with the necessary equipment.

“I will never forget 10 June 2004. At precisely 4pm Radio Sîngera was finally on air again, 24 hours without interruption”, looks Mocanu back in time. Trouble was not over, though. In 2006 Radio Sîngera faced again a difficult situation. “After an interactive radio show, where listeners criticised the Russian Orthodox Church, the communist government kicked us out of our studio.” For one year Victor Mocanu and his staff were forced to broadcast from a tiny, self-produced container. “But we didn’t give up our fight for a free radio station with appropriate conditions”, was Mocanu sure that the comeback of Radio Sîngera is just a matter of time. In February 2007 Radio Sîngera re-opened its doors in a perfectly well equipped studio in Liceul Sîngera. Obviously the new studio was a high motivation for the 20 radio enthusiasts and thus Radio Sîngera could improve its quality. “Next to professional radio shows, we want to give youth a chance”, states the pensioner and is proud that “most of our radio makers are pupils from the school next door, all of us work on a voluntary basis.”

Radio Sîngera is best described as an educational radio station focusing on political, cultural and social themes. According to the founder, the listeners appreciate the objectivity of Radio Sîngera, as they know that “we are not restricted to censorship.” Due to several live programmes in schools, hospitals, offices etc. censorship would not be possible at all. In “Europe today and tomorrow” a university professor answers current questions concerning our common status quo and future. Although Mocanu’s favourite band is “Modern Talking”, Radio Sîngera mainly plays Moldovan music from folk to pop. One hour daily, however, is dedicated to Neue Deutsche Welle songs. Each morning from 7 to 9am – hopefully without further obstacles -, Radio Sîngera starts in the day with the words: “Bună Dimineaţa Moldova – Good Morning Moldova!”

To see some photos of Radio Sîngera’s way to success, follow this link!

A few days ago we were informed that Victor Mocanu lost his last battle after a long illness. Moldovarious.com would like to offer their sincere condolences to his family and his friends from Radio Sîngera.