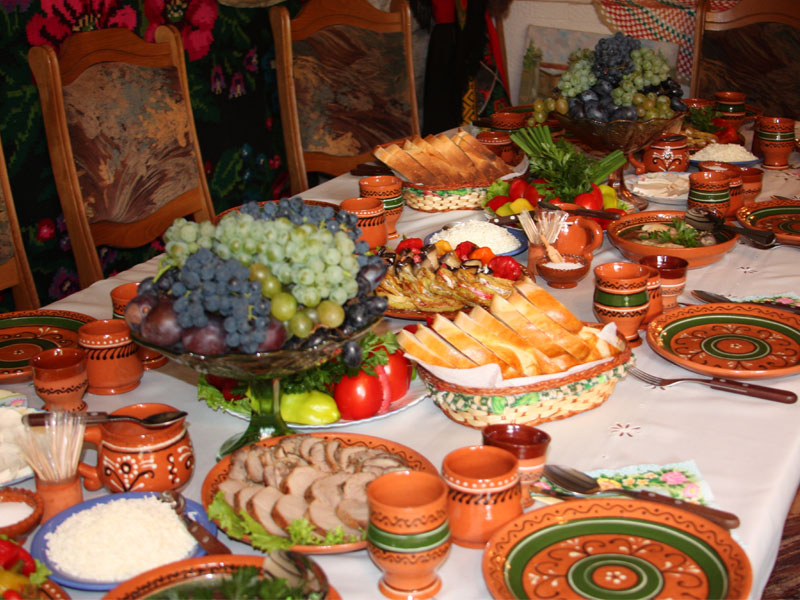 Cuisine is an important element of the national identity, just like music, folklore, national costumes, traditions… When we travel to a foreign country, it is not just about sight-seeing and museums – we tend to try as many local foods as we can. I wouldn’t say it is the best way to get to know the people, but after all, the main dietarian principle states that we are what we eat. To put it differently, what we eat is what we are.

For example, it’s all about coconut milk and shrimp in Thailand, because their lands abound in coconut palms, and their coastal waters swarm with shellfish. In China, the most courageous of us will brave the fried bugs, ants, and worms, as the Chinese believe that everything that is alive is edible; moreover, there are poor and deserted Chinese provinces where such weird culinary habits were dictated by poverty and arid lands with few things to eat. The Japanese sushi and sashimi, now a global fixture, will introduce the gourmets to the Zen of eating, as everything the Japanese do is Zen, and you don’t even have to go to Japan to try it. The Mexicans are all about meat and corn, as they have large plains for cattle, and arable lands for maize and beans. To sum it all up, the cuisine of any nation is preconditioned by its agricultural conditions and natural environment; and the culinary heritage is something that gives it shape and distinction.

Moldova has at all times been an agricultural country. Our ancestors bred cattle and grew fruits and vegetables; therefore, the Moldovan cooking involves both animal and vegetal products to equal extents – meat and vegetables, dairy products and eggs, mushrooms and cereals, as well as game and fish. Moreover, as Moldova has historically been a crossroads of commercial routes, its cuisine still preserves a touch of many foreign influences. The famous sarmale, i.e. rice and meat wrapped in vine or cabbage leaves, are obviously related to the Georgian dolma, which is pretty much the same, only with less rice and more meat, or even with meat only. The fried mince sausages, mici, are clearly a reference to the renowned German sausage. But there are dishes specific to Moldovan cuisine exclusively (if we do not take account of the Romanian cuisine, which is pretty much similar to the Moldovan one, although there are differences). But let us take it in due order, from entrées to dessert.

As the appetizers were and are not very popular in the Moldovan tradition, the meal usually starts with soup. The signature soup of Moldova is the zeama. It is always made on the basis of chicken bouillon and none other, or else it’s not zeama anymore. Traditionally, it contains home-made egg noodles, but some chefs like to add onions, carrots, potatoes, and greens, like parsley, dill, celery leaves, and lovage. Sometimes raw eggs are added, but the eggs have to be beaten first so when they are added to the soup, they form some sort of noodles, too. This soup is served with sour cream and white bread, and home-made red wine is a nice thing to go with it, too. There are other soups, too, like ciorba, made of pork or lamb broth and vegetables, ciorba de peşte, i.e. fish soup, and borş scăzut, which is a specific dish requiring, I believe, closer attention.

This is a specific regional dish cooked in the central and southern districts of Moldova. It’s more of a second course than a soup, but as it contains the word borş (which, I believe, does not require translation), it would be appropriate to include it in the soups category. This dish is prepared with pork ribs, pickled cabbage leaves, sliced carrots and onions arranged in alternate layers in a cast-iron round-bottomed pot (called ceaun). All this stuff must be stewed for several hours and served hot. (This is a winter food, as in summer there are a lot of fresh vegetables to experiment with, and pickles are a winter thing. Pickles are, in general, a very popular food in Moldova, and there is a huge variety of pickling recipes for tomatoes, cucumbers, apples, pears, carrots, onions, squash, eggplants, and even watermelons, the latter being, by the way, beyond delicious).

There is an interesting superstition with regard to soup. The first bowl poured must be given to the head of the family, as the first bowl is believed to be the most delicious in the entire pot. Well, I don’t think ladies mind, as the first eater usually gets almost all the fat floating on the surface of the soup. So, this patriarchal tradition helps us ladies keep the mask of obedience on, and save our figures from extra fat.

A very important element of Moldovan soups is the borş de casă, which is an acidifying fluid obtained by pickling wheat bran with a large quantity of water and cherry, oak, and currant leaves. It also requires leaven – a small portion of bran from an already pickled portion. If you plan to make a truly traditional zeama for your guests, and need some borş de casă, you can always borrow leaven from the kind housewives of the village, unless you are a city person, in which case you can purchase the ready-to-cook product from the nearest supermarket, but no one can guarantee you that the industrially-made acidifier will have the flavor of leaves collected in the garden on a dewy summer morning. It can also be used to make a sweet fizzy drink with sugar and baking soda added. My brother and I used to drive our mother crazy by secretly draining her weekly supply of borş de casă, and sometimes were breaking into the pot even before the stuff was ready and properly acidified. Well, Mom put up with it, as she knew that this petty hooliganism would make a nice childhood memory.

In part II of “Taste Across the Frontiers” some delicious Moldovan main dishes will be served.