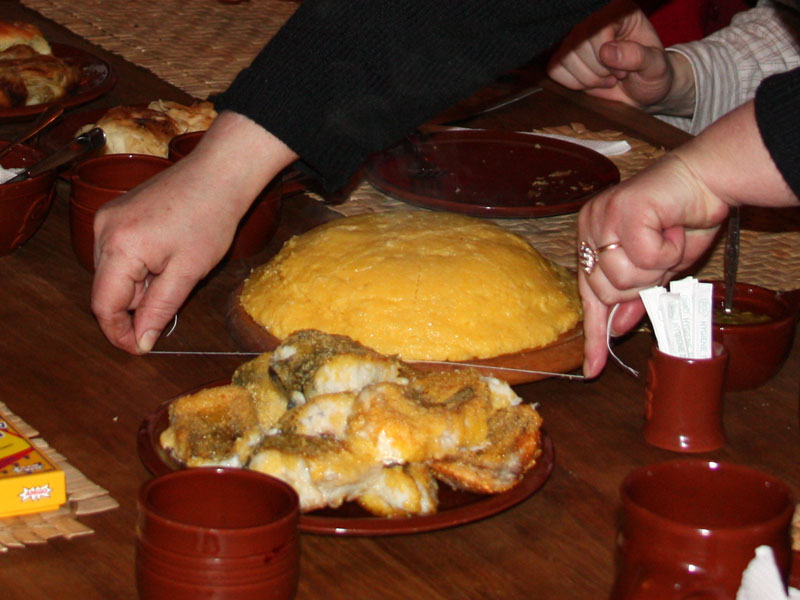 The most popular Moldovan main course is of course the mămăliga, which is, despite the exotically-sounding name, nothing else but plain good old corn mush, or polenta, as it is called in the European tradition. The recipe is very simple but the making is tricky: when you add the corn flour to boiling salted water, you have to mix thoroughly in order not to allow it to form lumps. If you intend to eat the entire lot for dinner, you can put a piece of butter in it, but if you want to save some to eat with milk for breakfast, don’t do that, as butter makes it too heavy when cold. It is also prepared in a cast-iron pot, but you can use a frying pan in case of a mămăliga emergency.

By they way, the cold remains fried in butter or olive oil are very good, not to mention that it’s a resource-saving breakfast solution. However, the most interesting thing about Moldovan mămăliga is not the mush itself, but the things that come with it. It is served with tocana (pork stew with onions, garlic, and black pepper beans), cottage cheese and sour cream, goat or sheep cheese, scrambled eggs with bacon rinds, tomato sauce (sliced tomatoes fried with onions and sweet pepper) as a summer option. The yellow sun of the mămăliga surrounded with all those colorful appetizers is a lush and mouth-watering sight reminding of the magnificent Greek meze, although the ingredients are totally different. According to the Moldovan tradition, the mămăliga is cut with thread instead of knife, and the piece of thread is not discarded after the meal, but is kept in the cutlery drawer till the next mămăliga party. Another traditional element is that the head of the family is the only one who operates the thread and cuts the thing. Unfair as always: the woman does the hard work, and the man gets the honors. Well, Moldovans are indeed a patriarchal people, so I’ve never heard of a feminist protest about the mămăliga thread.

Now let us proceed to the most interesting chapter of Moldovan cuisine – pies. The variety of forms and fillings is virtually unlimited, the most popular being, of course, the sheep cheese pie. In spring and summer it is made with chopped spring onions added to the cheese. This is also the oldest kind of pie, being literally the Moldovan shepherd’s pie, as sheep breeding is an ancient occupation of this people, and rennet cheese – a common product of it. Other than that, the list can go on forever: potatoes – raw and mashed, mushrooms (actually, the mushroom pie comes from the Russian culinary tradition), cabbage – fried, pickled, and fresh, cottage cheese, eggs, meat, greens, pumpkin, cherry, apple… There are also different types of folding: poalele-n-brîu (literally – tucked-up hem), where the filling is put in the center of the dough, then the edges are stuck together in the center around the filling; învîrtite – the pie is rolled like a sushi roll, with the filling inside, and the word means “rolled” as it is. The ordinary pies look very much like the Italian calzone. In a word, it is Pieland, open for eating your way through all of its delicious attractions.

It would take too much writing to tell about all the types of main courses that the Moldovan cuisine abounds in: lamb chops, schnitzels, the abovementioned sarmale, sausages with green peas and mashed potatoes, et cetera, et cetera. Let me just say that all the gifts of gardens and orchards, lakes and rivers, woods and plains are used in the process. The Moldovan cuisine is also very inventive and does not hesitate to adopt foreign traditions and amalgamate them with its own.

Now let us discover what the Moldovan cuisine has in store for sweet teeth. This area is influenced by foreign traditions to a greater extent as compared to other foods, but there are still a couple of trademark Moldovan dessert recipes. The most popular is boiled dried prunes filled with walnuts and served with sweetened whipped sour cream. Dried fruit is also used to make uzvar – some sort of compote made of dried and boiled apples, pears, prunes, berries, and lemon peels. Crepes are very big in Moldova, but they are obviously a gift from France. Well, it was more reasonable to borrow the crepes than the guillotine, so everyone is better off like that. Crepes are served with jam, honey, sweetened cottage cheese, fresh fruit, or hot chocolate (the latter is definitely as non-Moldovan as it can get, but it’s no longer a trademark of the Maya, so why not mentioning it?).

There are also many things borrowed from the Turkish dessert cuisine, as Moldova has been under the Ottoman oppression for 300 years, and the influence was inevitable. The most popular things are the halva and the baklava. The rahat lakoum, much better known as Turkish delight, is a common thing, too.

A good thing to wash these sweet things down with would be a glass of divin, i.e. Moldovan cognac, or really good sparkling wine, white, red, or pink.

In the last part of “Taste Across the Frontiers” Anastasia Stratu will give away the secret of her favourite recipe.