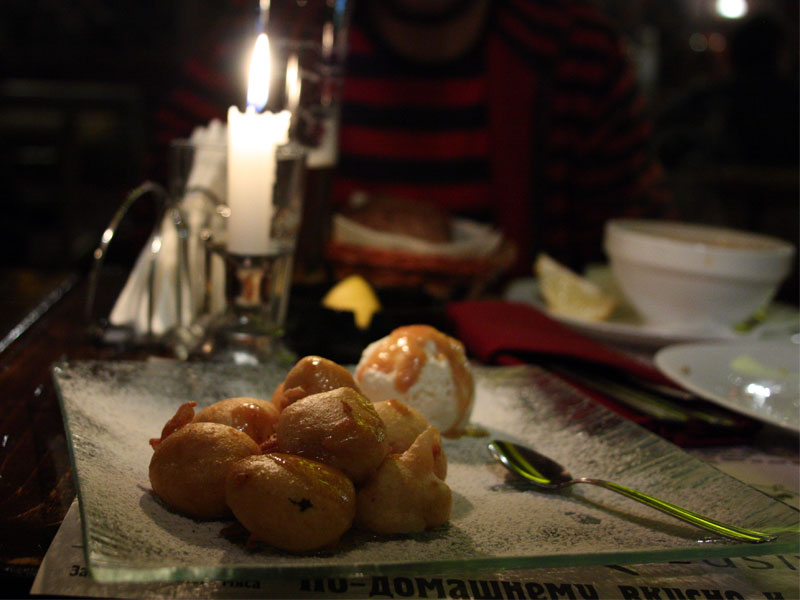 Every national tradition provides for special dishes made on holidays only. In Moldova, there are specialties made on special occasions. For Christmas, the food is mainly made of pork. In rustic households the swine, fattened-up during summer and fall, is usually slaughtered three days before the Christmas Eve, and there is even a saying referring to this tradition: “You cannot fatten the swine on Christmas Eve”!

Meaning that you cannot do quickly a thing that requires a lot of time to be done. Besides, in the Christian Orthodox tradition, the Christmas Day is the end of the Advent, when people can have meat after a long period of fasting. Also, on Christmas Eve the carols singers are welcomed with sweet pies and sausages.

Another special dish is coliva, wheat grains boiled until they get soft, then mixed with sugar or honey, and with different toppings like caramel crumbs, crushed nuts, dried fruit, raisins, almonds, anise seeds, cinnamon. This is a ritual food in the Orthodox and Greek-Catholic Christian tradition, served at memorial services, as the kolliva (Greek for “grain”) is a symbol of death and resurrection, according to the words of the Gospel: “Verily, verily, I say unto you, except a grain of wheat fall into the ground and die, it abideth alone: but if it die, it bringeth forth much fruit” (John 12:24). Besides, coliva is blessed in church and eaten on the first Friday of the Lent, and on the days of Saints commemoration. Also, in some regions of Moldova, the coliva is served on Christmas Eve and the Day of Epiphany.

On Easter, the main course of the day is fried lamb. In the Christian Orthodox tradition, the lamb is a symbol of Jesus’ sacrifice for the humankind, and as we spill the blood of the slaughtered lamb, we must remember the blood that Christ has spilled to save us. The other Easter dishes, like the Easter eggs and the Easter cake, come from the pagan tradition, and represent the coming of the spring and the eternal cycle of seasons. The egg is a symbol of eternity in paganism. These have amalgamated with the Christian ritual, as Easter is celebrated in spring. Note: the Easter eggs in Moldova are not chocolate eggs but common chicken eggs, hard-boiled and painted red. In addition to the pagan version of the story, there is a Christian legend about the eggs. Allegedly, when Jesus was crucified, Mary, His Mother, brought a basket of eggs to give to the guards and to ask them to show her Son some mercy. But the guards just jeered at her and taunted Him even more. Mary, crying, left the basket at His feet, and His blood dripped on the eggs. Then, Jesus whispered that on this day all the Christians should paint the eggs red. So, the eggs painted red have become a symbol of Christ’s resurrection.

In our era of overwhelming globalisation it would be impossible for any culinary tradition (European, at least) to avoid borrowing trends from other countries. I am sure, dear readers, that you have noticed the absence of salads in the text above. Well, that’s because the tradition does not provide for them. Salads belong to the European custom, with its long eight-course meals at rococo tables, unobtrusive music, and philosophical conversations. The rough and restless Moldavians in tangled sheep furs did not care for that, as they needed to quickly gobble a healthy meal like an entire boar or ram fried on a fire, and drain a barrel or two of red wine, as they hurried to beat the wits out of some Turk or Tatar conquerors. They did not have the time for, or the idea of, toying at leisure with a couple of lettuce leaves artistically arranged on a fine china plate under sauces that took hours to prepare. But now, when Moldova can also boast a refined life, in some circles at least, its eating habits have acquired many non-traditional, foreign but yet delicious traits.

The modern Moldovan cuisine can surprise you with culinary whims like intricate salads, like the vegetables and goat cheese one that comes from Bulgaria, luxurious meat courses – guests from Germany, fluffy light desserts – direct descendants of the French tradition. The Russian influence is very strong as Moldova has been a part of the USSR for way too long, and together with Socialism, ugly architecture, and planned economy, Moldova has gotten the potato pancakes, the beet and herring salad, the mince pies, the heavy rich honey cakes, and many other things. Anyway, due to the Bolsheviks Moldova is now a bilingual country, which is a great advantage, but I guess it could do without panel house-building and absolutely appalling cabbage soups.

Well, history cannot be changed, and if you don’t like cabbage soup, you can always opt for a pizza (which is now omnipresent in Moldovan eateries) or very decent fajitas found rather unexpectedly in places like street cafés, or, predictably, in cactus-and-sombrero-themed restaurants. And it is not limited by that. Pasta of any kind, from carbonara to capelli dei angeli? Sure. North Sea salmon and endive-ruccola salad? No problem. Thai noodles? Just ask for it. Uzbek lamb pilaf? Anytime. As for the sushi, be very careful and go to Japanese restaurants only following recommendations, for you risk being served raw fish with a distinct aroma of rot, slapped on lumps of sticky rice, under the name of nigiri, and spend the rest of the night squirming on the bathroom floor (as I, an inveterate sushi lover, have done way too many times).

But if you are just visiting, and are interested in local dishes, go to ethnic Moldovan restaurants, so that you could take home both memories of beautiful scenery and reminiscences of good food, like, for instance, a boiling-hot zeama with home-baked bread, a pile of sarmale with a side of roast lamb, and a sheep cheese pie, topped with a couple of glasses of 2001 Cabernet Sauvignon, which is dirt-cheap and so good that you’d need a new word for “good”. Bon appetit, or, if you want to be local all the way, Poftă bună!

P.S. The editor-in-chief was very kind to ask me to share one of my favorite recipes with the readers. I am a good cook, like the vast majority of Moldovan women are, but my recipes are mostly fusion, as I modify the recipe to the extent of unrecognizable, to make something that is totally my trademark. The cheese soup recipe that I want to share with you is based on the traditional Russian cheese soup, which is very simple – just bouillon, meat, onions and cheese, but the mine one has gone a really long way from that. So, here you go:

Place the meat in boiling water, boil for 3-4 minutes, then take out the meat, pour out the bouillon, then pour boiling water on the meat (boil some water in a kettle to have it at hand). This is called “second” bouillon, and is pretty much the secret of the soup, as it is clearer. Do NOT use cold water to make the second bouillon!

Chop an onion and add it to the boiling chicken with a part of the spices. Let boil for 20 minutes or so, until the meat is almost ready.

As the vegetables boil, chop the other onion, peel and chop the tomato, and fry the stuff in olive oil. When it is ready, add some oregano and basil. In order to peel the tomato easily, put it for a minute in boiled water. It will peel effortlessly. When the vegetables in the soup are ready, add this fry-up to the soup.

Add the processed cheese and the cream to the soup. Use the sort of cheese prepackaged in little triangles in round boxes as it’s easier to measure the dosage of cheese. Usually, a box of 8 triangles is enough for 1.5 liters of soup. If there is no such thing in your grocery store, use ordinary processed cheese – 2-3 tablespoonfuls will do. The cream is added according to taste. Mix well until the cheese melts.

Squeeze the juice of one lemon and add to the soup. If you like your soup a little sourer, add more lemon juice. Chop the dill, the parsley, and the avocado, and add. Add salt according to taste. Add the rest of the spices, mix, and let boil for a minute. If you like your greens a little crunchy, do not let the soup boil for that last one minute. Just add the greens in the last place, and take the soup off the stove immediately.

Note: if you don’t like avocado, it’s totally OK if you don’t use it. It is a recent discovery of mine, and my friends whom I recently cooked the soup for, said that the slight bitterness of half-ripened avocado was very appealing. But nothing’s written in the stone, right? You can use other vegetables if you don’t like the ones in my recipe, you can add and remove things at your choice. As Captain Planet, a character of the popular 1990s cartoon series, used to say, the power is yours!