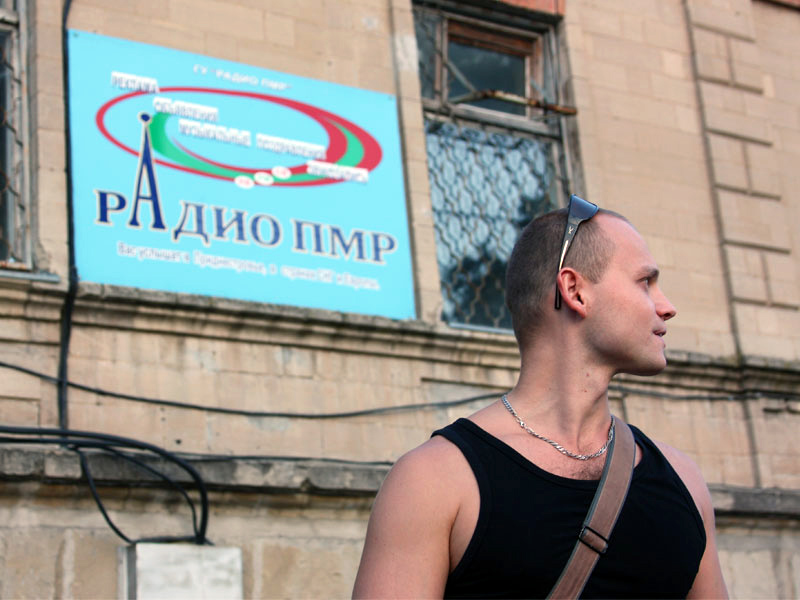 It is a hot summer day in Tiraspol, Pridnestrovje’s capital city situated along the Dnister River. We are waiting in the garden of the “Viennese Café” and for Andrey Smolensky and our – hopefully – original Austrian Kaffee Melange. 24-year-old Smolensky finished his studies as a translator at Tiraspol University and works as a news speaker at Radio PMR. A sporty young man enters the Café. “Servus, alles leiwand?” To our surprise Smolensky welcomes us in the finest Viennese dialect. Next to his passion of radio making, he has fallen in love with Austria. In 2002 he got to know two photographers of Vienna. Year by year they visited the Pridnestrovian Moldavian Republic, so the official name of the country, and took more than 13.000 photos. Together with the two Austrians, Smolensky published the trilingual photo book “Hier spricht Radio PMR!” “I was at the book presentation in Vienna”, says the young journalist proudly, “I really like Austria and the people there.”

The leading politicians of the High Soviet, thus the name of the Pridnestrovian government, had the idea to launch a foreign news service in the 90s. Due to the lack of financial and human resources this idea could not be realised then. “When I was a student I worked twice a week for radio PMR and slowly established the German news service”, explains the ambitious young man. Next to the German news service there is also a French and an English one. Positive feedback from international “fan post” highly motivates the radio maker to continue his job and to show Europe that “PMR is just an ordinary state”. The transmission, however, reminds more of a pirate station. The frequency is changing continuously, the radio shows are during the night. “You know, we have to pass the Moldovan news blockade”, thinks Smolensky about a possible reason for the late transmissions, while he gives us his business card with both, the Moldovan and Transnistrian phone numbers. “On the other hand, the fares for international transmissions could be too high during the day.”

The smart English and German teacher, who is as well fluent in Romanian, has high goals in his life. “As a student I was the youngest teacher ever at our university, then I did an interesting job in the management of the local Football Club Sheriff Tiraspol and now I work full time at Radio PMR”, reflects Smolensky the last few years. Thanks to the book “Hier spricht Radio PMR!” he got some international recognition and a couple of lucrative jobs. Thus the oncoming father did the coordination and translation for the reportages of the channel Arte and the Austrian magazine News. There were also more complicated tasks to solve to. “One day a German turned up and wanted to find the grave of his father, who lost his life here in World War II”, tells us Smolensky with a smile. He got a couple of Euros for the successfully completed mission. The young radio maker has to think about his family though. In none of the jobs he received more than 150,- Euros. Nevertheless he is optimistic when talking about the future, “I want to move to Austria with my family and get the Austrian citizenship, leiwand oder?” At least his language skills highly recommend him to do so.